)Secret Empire #1 hit the shelves today. It’s going to be a hard road––for everybody: for the Champions, who are currently hiding in a compound in Arizona; for the American people, who are currently being reeducated in Hydra-improved schools; for Captain America, who is learning the difficulty and loneliness that come with being in power; and it’s going to be a hard road for those of us who are reading.

Division at the heart of everything

Steve struggles to reconcile himself to Sharon Carter, who can’t forgive his betrayal of his principles. He struggles to persuade friends like Rick Jones that he’s trying to create a better world for everyone. He struggles against the Hydra high council, which seems to be barely holding off infighting and outright schism.

Will we ever get Steve back?

Rick Jones and Rayshaun (who will eventually become the new Patriot) hold out hope that Steve Rogers will eventually be set right again. In one of the most moving scenes of the book, Rick tells Steve what we’ve all been thinking (well, those of us who love Cap, anyway).

Meanwhile, Rayshaun brings information (provided by Rick) to the A.I. Tony Stark that he claims will show what’s wrong with Steve, how to beat Hydra, and how to set Steve right, and Tony has no interest in looking at any of it. 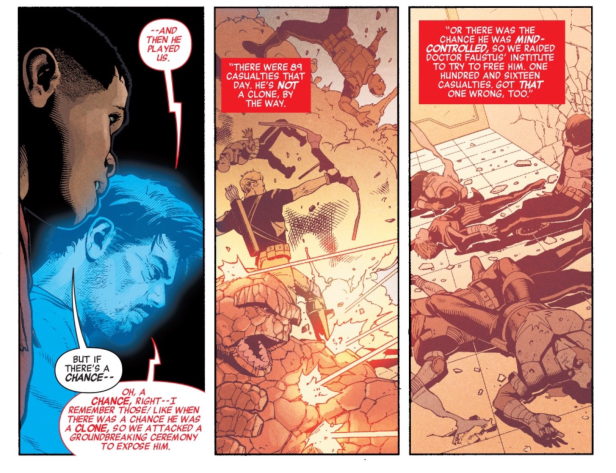 Moreover, the man we see throughout the issue acts exactly as we would expect Steve Rogers to act. He resists the Hydra supreme council’s more villainous suggestions, proving yet again that in spite of Kobik’s reality-warping, this man is still Steve Rogers, and in many ways he still just as moral as he’s always been.

But at the end of the issue, Steve has Rick executed by firing squad. The moment is meant to come as a shock––Gasp! He killed Rick Jones!––but it didn’t shock me all that much. Mostly it just saddened me. How is it that this man––the one who tried his best earlier in the issue to save Rick from execution, the one who is still trying to figure out what is the moral thing to do––could be reduced to executing one of his oldest friends?

Well, we just saw him orchestrate the death of his best friend just two weeks ago.

Will we ever get Steve back? Clearly we will. But it’s going to hurt getting there, and it isn’t clear how much it is going to cost Steve (along with everyone else) for him to recover from what Kobik and the Red Skull have done.