No doubt the most shocking thing to happen in Batman #24 is what happens on the last page. Well, “shocking” probably isn’t the right word. King has clearly been leading up to this moment for most of his run. Anyway, the last page certainly marks a change in Batman’s story. But it’s the philosophical ideas in the issue that interest me most.

Gotham Girl (Claire Clover), is trying to decide what she will do with her future. The dilemma that she faces is interestingly similar to the one that Achilles faces during the Trojan War. The hero of ancient Greece was told by his mother, Thetis, that he could fight and die young in a glorious death, or he could go home and live a long life in obscurity. Similarly, Gotham Girl can choose to use her powers, but every time she does, they bring her a little closer to her death. Or she can retire from super heroics and live a long, uneventful life.

Standing at the tip of a communications tower on top of a Gotham skyscraper (because that’s the kind of place where superheroes hang out and search their souls), Gotham Girl wants Batman to tell her what she should do. Should she use her powers to help other people, knowing that doing so will kill her? Or should she stop saving people who need saving and live a “normal” (i.e., unheroic) life?

In some ways, Claire’s dilemma and her attitude toward it is typical of modern Americans. Our choices don’t usually involve superpowers that will kill us, but we often find ourselves anxious about making the right choices for our future, and we think that those choices are entirely up to us. We think that freedom means getting to choose who we are and what we do. That’s the line that we’re fed over and over again as we grow up: You can be anything you want to be as long as you put your mind to it! You can do whatever you want to do as long as you believe in yourself!

But deep down, most of us ought to know that these things (always well-meant and often sincere) aren’t true. We can’t do or be simply anything we want to do or be. Our options are always determined by our personal strengths and limitations––and no matter how much we talk about persistence, the world will only ever give us a limited number of options.

Perhaps more importantly, though, the idea of freedom as just a matter of doing or being what we choose is inadequate for another reason. We live in a time that treats identity as a matter of selecting from a buffet of options based on our personal preferences––options that include interests, hobbies, passions, loves, hatreds, and any number of other possibilities. But what about that portion of identity that we don’t choose, the one that is given to us? It doesn’t matter where you think it comes from––God, nature, genetics, society, or somewhere else. Most of us have a sense that our identities are not a matter of simply choosing what clothes to wear, but are imprinted on us like a base operating system. In that case, freedom can’t mean merely choosing who or what we want to be.

Batman seems to get this when he answers Claire’s question about what she should do:

This answer flies in the face not just of Claire’s line of questioning, but of what most people believe about freedom. Most people think that “freedom” means deciding what you like to do and then pursuing that goal. But our freedom isn’t ultimately about what any of us “likes” to do. It isn’t even about that ever-elusive pot of gold at the end of the rainbow, Doing What Makes Us Happy. For Batman, freedom means nothing more or less than doing the thing that you have to do.

As she wrestles with what she will do with her powers, Claire wonders aloud why Batman doesn’t fly. He’s an ultra-resourceful billionaire, after all; he could figure out a way to make himself fly if he wanted to, and he admits as much to Gotham Girl. So he does have a choice, an option. He could theoretically decide that he wants to fly and then do it, but what he wants to do doesn’t figure into his thinking at all. What matters is whether or not he needs to fly: 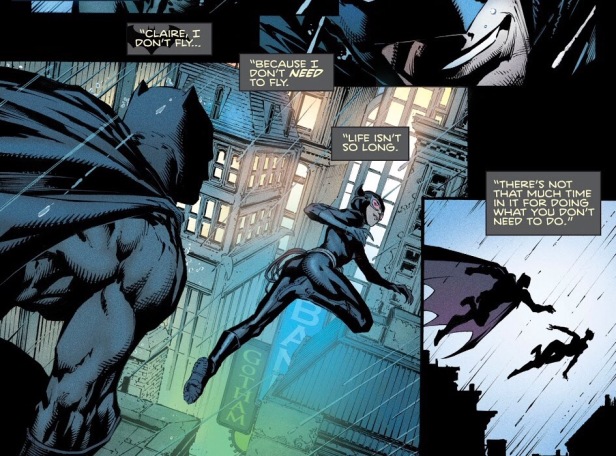 And though the connection might not be obvious, all of this explains Batman’s proposal to Catwoman at the end of the issue. Before he asks her to marry him, Bruce tells Selina that he bought the diamond he stopped her from stealing when they first met:

Batman’ proposal to Selina is like everything else in his life: a matter of necessity. He doesn’t deliberate about his options and decide that the one he likes best is marrying Catwoman. He does it because he has to.

It’s a strange pairing, necessity and freedom––paradoxical, even, and it probably seems like nonsense to most modern Americans. We’re trained from birth by nearly every part of our culture to think of freedom as a matter of preferences and options. But while we do have options to choose from in life, “freedom” is a paltry thing if it means only the act of selecting from the items that life presents us with like choosing a flavor of ice cream at the grocery store.

And who better to argue for the freedom to do what we have to do than the Dark Knight, the man whose path was set for him in an alley as he knelt by the bodies of his parents, the man whose life is driven by a mission given to him at gunpoint?