In the Dark Nights: Metal tie-in “The Batman Who Laughs,” we learn the origin of perhaps the worst villain imaginable in the DC multiverse: a Batman who lacks all morality––or, more precisely, a Batman who has the amorality of the Joker. 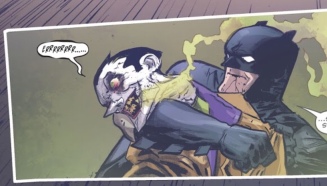 “The Batman Who Laughs” opens in the past of Earth-22 (for those unfamiliar with the DC multiverse, it is composed of multiple universes designated by their Earths). The Joker has managed to pull off the murder of nearly everyone in Gotham, and he has Batman drugged and tied to a chair. He taunts Batman about the Dark Knight’s “one rule”––the rule not to kill––and with a gruesome description of Jim Gordon’s death. Enraged, Batman breaks free of his bonds and attacks the Joker, who promises that he will “never stop.” Batman breaks the Clown Prince’s neck––only to discover that doing so releases a poison gas from the Joker’s mouth, a poison that is specifically designed to target the parts of his mind that determine his morality while leaving his exceptional intellect intact.

In other words, it combines Batman’s most dangerous characteristics with those of the Joker.The result of this combination is one of the most horrifying villains I’ve seen in a comic. After killing Robin, Batgirl, Nightwing, and Red Hood, this new Batman dispatches Superman, Lois, and their son in a gut-wrenching scene, and in Dark Nights: Metal, he threatens to plunge the DC multiverse into a darkness the likes of which it has never seen.

I’ve written before that Batman is a modernist figure in some ways similar to the modernist poet T.S. Eliot. He has seen the worst that life has to offer and thinks that all possibility of meaning in life has been shattered. But rather than give in to despair, Batman holds on to the fragments of meaning and tries to put them back together by the sheer force of his indomitable will. (This is best captured in Batman’s line from BvS: “[My parents] taught me that the world only makes sense if you force it to.”) The Joker, on the other hand, is perhaps the logical conclusion of postmodernism (some might say that “logical conclusion of postmodernism” is a contradiction in terms): freed from the shackles of meaning, the he doesn’t lament the loss of meaning; instead, he sheds all pretense that anyone can seriously believe in morality anymore.

Now, comics are comics; they aren’t the real world. But if they do their job as myth, they tell us something about the real world––about what the real world is like, what is possible in it, what we ought to aspire to, or what we ought to fear. In combining the worst in Batman and in the Joker, “The Batman Who Laughs” gives us a mythic picture of a world that has moved through both the modern and postmodern conditions into something else––a place where all the intelligence and power of the modern world is combined with the amorality of a more brutal age.

I can’t help seeing in this story the shadowy picture of contemporary America—or at least what we might be headed towards. The revelations over the last several weeks about Weinstein, Moore, Lauer, Conyers, Franken, and countless others point to a major problem––not just a problem of women’s rights, sexual ethics in the workplace, or systems of accountability, though; it points to an even larger moral problem. As a culture we have largely given up on virtue and dismissed any claims that morality make on people. Sure, we make moral arguments for and against tax policies. Sure, we take to social media with our moral outrage when somebody says something stupid or when some politician is outed as a pervert. But for decades our culture at large has minimized questions of personal character. It didn’t matter, for example, that Bill Clinton did reprehensible things to women––until it became politically necessary to care about it. And lest someone accuse me of targeting Democrats, many Republicans are just as guilty. Far too many have said that it doesn’t matter whether or not Moore is guilty because “we need his vote.”

We live in the most technologically advanced age in human history. We also live in a time when the people in power have more power than the worst tyrants of the past. Only virtue and morality can hold them in check. We cannot dismiss morality, virtue, and character and then act surprised when we find that people act immorally––especially people in power like Weinstein and the rest. We cannot accept the postmodern claim that morality is merely relative (which is simply another way of saying that there is no morality) and still demand that people act with decency.

Or to put it another way, if we embrace the postmodern condition, then we should not be surprised that the people with power in our culture are monsters. Though he is just a character in a comic book, the Batman of “The Batman Who Laughs” is a picture of the monsters that we could be if we ever become completely unshackled from the limits that morality and virtue put on us.

7 thoughts on ““The Batman Who Laughs”: The Monsters That We Could Be”