Detective Comics continues to go to interesting philosophical places. One of my favorite aspects of the most recent arcs of Tynion’s run has been its exploration of the dangers inherent in ideology. Issues 970 and 971 continue to explore that question with Tim Drake, who, newly freed from his prison, comes back to Gotham obsessed with using “good ideas” to create a utopia.

But while Tynion’s critique of ideology has been powerful and has made me say “right on!” at the turn of every page, it’s the story of Clayface (Basil Karlo) and Dr. Victoria October’s efforts to cure him of the Clayface condition that raises the most questions and complications.

Basil has been part of Batman’s team of heroes in Detective Comics since issue 934. He has been an invaluable member of the group, but he has also been a liability. He’s known to the public only as a deranged murderer, and if he stays in his Clayface form too long, he risks losing his mind and becoming the monster he’s known to be.

In issue 970, Dr. October, who was recruited by Batman to find a cure for Basil, thinks that she’s close to a remedy for his condition, but Basil is afraid that the cure for his physical condition won’t cure him of the insanity that constantly threatens to return: 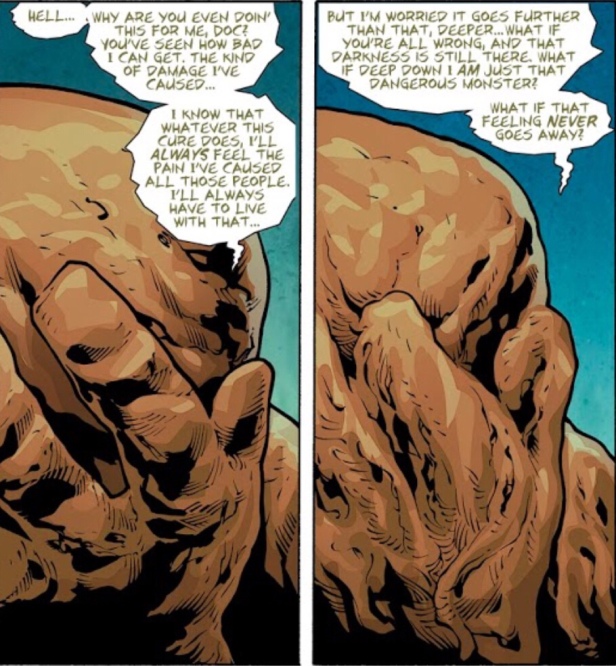 Any “cure” that Dr. October produces for him will be meaningless if the violence and insanity that have marked Basil’s history are really just part of him and not merely a product of his bodily condition. October responds by comparing Basil’s condition as Clayface to her own status as a transgendered person: 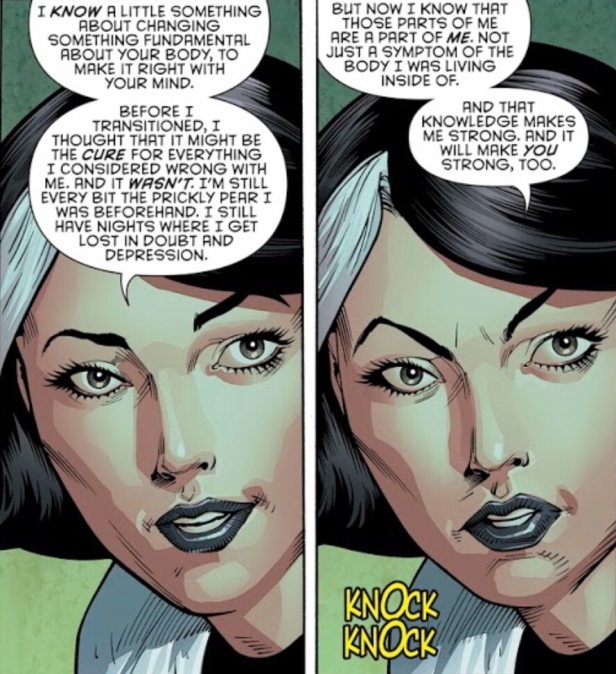 October seems to be trying to both reassure Basil about the effects of his own bodily “transition” and also warn him that it is up to him to manage his personality and character. No surgery or procedure will change Basil. As well-meaning as October is, it’s hard to see how this should comfort Basil (and we see in issue 971 that the advice doesn’t help him very much) because there’s a big difference between being a “prickly pear” and being a murderous psychopath.

But there is something else here, too—a deeper philosophical problem raised because I suspect that Tynion here is trying to tell his audience something about bodies, persons, and transgenderism by juxtaposing Clayface with Dr. October.

I will not use this blog to debate, argue for, or argue against transgenderism or related topics. Call me a coward if you want, but I prefer to deal with ideas in ways that might be helpful to people on both sides of controversial political positions, to make people think, whatever their opinions are. But it is clear from his run on Detective Comics that Tynion has an interest in advancing a progressive position on transgenderism, and that is certainly his right. Moreover, he has so far done it in a way that has never struck me as preachy or forced (which you can’t say about a lot of comics; see Warren Ellis’ Trees, for example).

But using Clayface’s story as a vehicle for a message about transgenderism seems odd and complicated (not necessarily complicated in a good way). October’s central claims seem to be as follows:

She uses these claims to speak to Basil’s Clayface condition, but is he truly in the same situation as someone like October? When he is Clayface, Basil is no longer human in the true sense of the word. He still (mostly) retains his human mind, but being “human” includes the possession of human cells, organs, etc. Moreover, being “human” is partly defined by the limitations placed on us by our bodies, and Clayface allows Basil to escape many of those limits: he can become anyone he chooses to be.

Perhaps most importantly, Basil’s problem is that he is constantly in danger of losing himself to insanity and to violent tendencies, not that his body’s sex and his mind’s gender aren’t aligned. Essentially, Clayface has a disease that needs to be cured. This strikes me as an odd choice for Tynion to make if he wants to use Clayface to say something about transgenderism. On the one hand, the fact that Tynion uses an analogy that doesn’t quite work out perfectly seems more honest than trying to contrive a neat, tidy one that does. On the other, one almost wonders if the analogy doesn’t end up undermining the philosophical and political point that Tynion is trying to make.

In any case, I look forward to where this story is headed. I’m a little behind on my reading, so I don’t know where things end up after Basil’s mind succumbs to insanity at the end of Issue 971. No place good, I suspect.

One thought on “Bodies and Selves: The Complicated Dualism in Detective Comics”