If you have not read The Vision by Tom King (with artists Gabriel Hernandez Walta and Jordie Bellaire), do yourself a favor and get a hold of it in trade paperback or find back issues where you can. It isn’t just good comics; it’s a revelation about what superhero comics can be.

The book centers on the suburban life of Vision and his android family: Virginia, his wife, and Vin and Viv, their children. Though their bodies are artificial and their way of thinking utterly unlike that of “normal” humans, the Visions try hard to live a conventional middle-class life: the children go to school even though they can assimilate information at a much faster rate than normal children; they gather around the dinner table at night in order to “review [the day’s] events”; they “sleep” at night by shutting down “in order that their systems can process the day’s input and eliminate that which is unessential.” But as their neighbors constantly remind them with their gaping, spying, and selfie-snapping, the Visions are not normal—no matter how much they try to fit in.

And then at the end of the first issue, something astonishingly violent and deeply disturbing happens and turns the Visions’ carefully ordered existence on its head. There’s a one-page panel near the end of issue #1 that is one of the most shocking images I’ve ever seen in a comic book, and from that moment on, I can’t help feeling a compelling sense of dread as I read the series.

But The Vision doesn’t just keep me reading because I need to know what happens next. Lots of good comics do that. The book explores all kinds of interesting philosophical questions, all from the point of view of artificially created, artificially intelligent beings. It asks questions about what it means to be a family, what it means to love, and what it means to be normal—but it does these things without resorting to the cynicism and bland irony that usually accompanies any exploration of middle-class life.

As a genre, superhero comics have always been good at exploring deep questions about what it means to be human, but The Vision elevates the medium in a way that has rarely been seen. I’m sure that I’ll catch flak from some circles for saying this, but I’d argue that The Vision is better and more sophisticated and more true to what life is really like than the book that people usually cite as the gold standard of comics: Alan Moore’s Watchmen. The Vision is daring, fascinating, and at times horrifying. But what is most surprising about it is how much truth it manages to tell about being human by telling a story about androids. 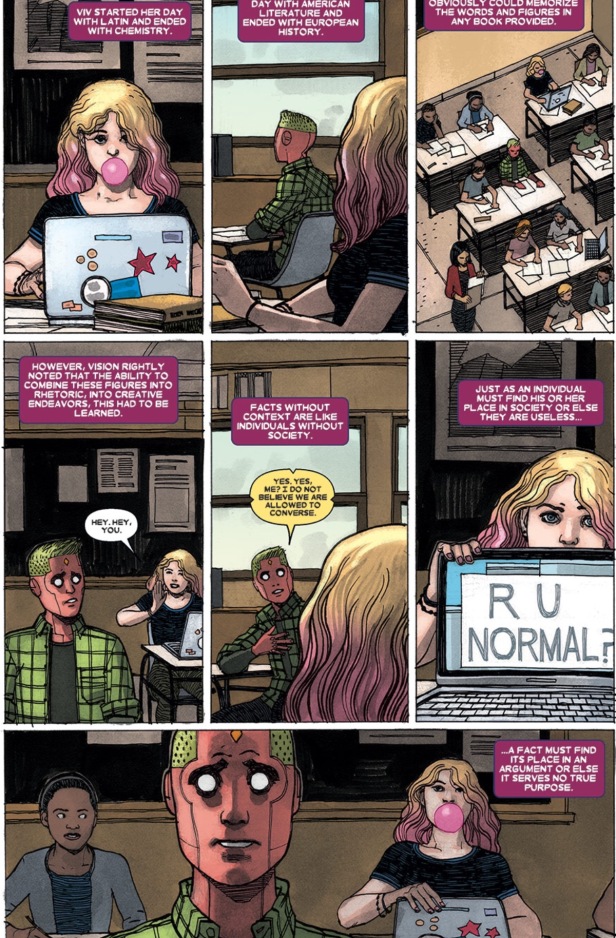 Sadly, the series comes to an end with issue #12 (as King has moved over to the Distinguished Competition to write Batman). Well, maybe not sadly. This book is so good that I’d rather see it come to a satisfying end than be unnecessarily prolonged.

I’ll be posting a full review of the series when it concludes.