Most of the complaints about Iron Fist had to do with the title character: Marvel should have made Danny Rand Asian to avoid the White Savior trope; Danny comes across as the epitome of “white privilege”; Finn Jones’ acting was stiff and uncomfortable; he’s clearly not as skilled a martial artist as his costars.

Marvel seems to have addressed most of those complaints pretty well in The Defenders (I say that after having seen only the first four episodes). Finn Jones seems much more comfortable in the role. In part I think that this is a result of being part of an ensemble cast. And though there isn’t a whole lot of fighting in the first four episodes, this show makes it easier to believe that Danny is The Living Weapon.

One of the show’s most striking scenes is the episode in which Danny and Luke Cage meet at Colleen Wing’s dojo after having fought in an alley the night before. As you might expect, their first conversation doesn’t go so well. Their personalities naturally clash. Luke is a reluctant hero who just wants to help the people of his neighborhood. Having been wrongfully imprisoned, he is deeply aware of society’s injustice and predisposed to be suspicious of people with power. Danny, on the other hand, comes from a life of privilege. He spent his childhood living in penthouse apartments and flying in jets. And now he uses his vast fortune to travel the world in search of The Hand. 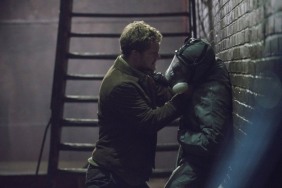 ancient evil organization, he quite naturally has little patience for him. He scolds Danny for beating up a kid named Cole in an alley in order to get answers about The Hand, and he points out that Danny had the power to change the world without ever raising a fist. Danny, who Luke thinks has never had to worry about whether not he would survive to the next day, can’t understand what life is like for people who are just trying to support their families.

Danny, on the other hand, who found Cole helping to clean up dead bodies in a room that had a picture of K’un L’un, has little patience for Luke’s attitude. As the Immortal Iron Fist, the one charged with defeating The Hand, he understands what’s at stake. He’s seen what The Hand is capable of, and he knows that if he fails to stop them, it won’t matter how many of his neighbors Luke saves from being swept into a life of crime.

Though Luke and Danny do eventually come to respect one another, the scene doesn’t end well. Luke walks away, muttering that a partnership between the two just won’t work, leaving Danny behind to steam.

It would have been easy for the show’s creators to have Danny chastened by the encounter: Luke would speak truth to power, and Danny would learn to check his privilege. But instead of preaching to the audience (which is what most shows do these days), the show trusts the audience with a more honest scene: a scene in which two men from very different worlds misunderstand each other.

When Luke finds Danny in the alley, all he can see is a white guy beating up Cole, a kid from Harlem that Luke has been trying to save from being swept up into a life of crime. He hasn’t seen what Danny just saw: a building full of slaughtered men, and Cole spraying acid onto the bodies to dissolve them. He also doesn’t understand the massive existential threat that The Hand poses.

Danny, on the other hand, hasn’t seen the life that led Cole to crime. He’s spent his entire life in extremes: he lived among the most privileged people in the world until adolescence, and then he spent years among the monks of K’un L’un, becoming a Living Weapon under some of the most brutal training imaginable. In both cases, he was far removed from the lives of ordinary people. And Luke is right to think that Danny has trouble understanding someone like Cole.

The first encounter between Luke and Danny could have been very different. The creators could easily have used Luke to sermonize us using Danny as a proxy, but what they’ve given us instead is a picture that strongly resembles our country. And it’s a picture that we need to see right now.

No doubt some readers will be incensed at this and accuse me of saying that Antifa and the Alt-Right are morally equivalent. They’re not. But it doesn’t matter whether one is better or worse than the other. And saying that they aren’t “morally equivalent” doesn’t mean that one is good and the other is bad. Opposing one doesn’t mean that you support the other. As long as we continue to demonize people whose views are different from our own, as long as we refuse to see that extremists on both sides of the political spectrum caricature the actual values of most people, we will continue to see our society unravel.

I’m only four episodes into the season, but what both Danny and Luke seem to be on their way to learning after their initial meeting is empathy and humility. Hopefully Danny will learn that his mission to stop The Hand won’t matter if it doesn’t benefit and respect individuals who are caught up in the conflict, and hopefully Luke will learn that Danny’s privileged background doesn’t mean that he isn’t doing his best to help make the world a better place.

And hopefully, as we all debate our relationship to each other and to our country’s past, we will all learn to better understand the experiences and values of our neighbors and to find a way to live alongside each other with respect and civility.

3 thoughts on “Luke Cage and Danny Rand: A Lesson in Humility and Empathy”